Debby
Coal City, IN, United States
I am a woman who has embarked on a life style change, not that there haven't been a lot of changes in my life. I was a military wife raising four wonderful kids over 30 years. I switched gears and learned how much I loved to hunt and fish. Eleven years ago, I was a contractor in Iraq doing web development. After three years in Iraq, I decided it was time to settle down closer to family. I found a farm on the internet near my daughter (35 miles on back roads) and bought it. I now have a wonderful throw away dog, who is probably Border Collie and Australian Shepherd, named Freckles, a lovely Golden Retriever, named Zarah, eight Great Pyrenees; six wonderful cats named Oscar, Simba, Finnigan, Charlie, Mittens and Tabby; five adult Nigerian Goats, Emma, Pepper, Blue, Pippen and Hugh; chickens, Muscovy, Pekin, Rouen, Cayuga and Mallard ducks; two Chinese Geese; a couple of Bourbon Red turkeys, some bee hives and I am building a new large raised garden. It's lots of work but I love it and to give it up would take a huge reason.

Back in the United States

I can't believe the I am back in the United States for good. I am actually going to pursue my dream of having my own farm. While I was waiting at the airport in Bahrain, I got an email that my little girl English Shepherd had been born. She is black and white and pictures will be posted after the pups and mom have bonded. I will probably pick her when she is about 5 weeks old and is beginning to show her personnality.

As we were getting ready to land at Dulles in DC, I saw the most beautiful moon above the clouds. It would have made a fabulous picture, however we were bound with seatbelts and not allowed to get up to get cameras. I love that I arrive at the farm on a full moon.

I emailed the gentleman with my tractor to make sure he had received my deposit and told him I had already added the tractor to my blog. I gave him the web address. He wrote back and told me that he had something to add to my story.

You can add this to the story.

Can you believe that?

I knew Coal City sounded familiar, then when I saw the pictures on your blog, I thought that looks familiar. I went back on my records and found the info where I had sold Mark a tractor, and sure enough, address was the same.  Mark had emailed me and told me he was moving awhile back, but what are the chances of this happening?

You have a beautiful place!

What are the chances of a woman in Iraq buying a farm in the middle of nowhere and then buying a tractor from the same person who sold the same tractor setup to the former owner of that same farm? Small world.

I probably should call this farm, "Debby's Little Internet Farm." First I found the farm on the Internet, next I bought the truck on Ebay and last night I was negotiating with an individual on the Internet who sells Kubota tractors. He generally sells on Ebay. Last week, I found one of his tractor packages that looked like it might be a pretty good deal, if I could get it at the right price. I wondered if my truck could pull the tractor, loader, bush hog and trailer included in the auction, so I sent him a question on that topic. He said that the package weighed about 7000lbs and so did my truck, so I would need to have it shipped. The auction was to be over about 6am, my time, so I got up early and gave bidding a couple of shots. I didn't hit his reserve price, so even though I was the highest bidder, I didn't get it. I figured, well that is that.

Yesterday, he wrote me and said he had another option, if I was interested. He bought a 2009 L2800HST with 240 hours, from the original owner. It has ag tires instead of industrial, no canopy, and does not have the skid steer attach bucket. It will have full warranty until spring of 2011 and engine and driveline warranty until spring of 2012. It was still more than I wanted to pay, so I told him I was looking for a basic tractor, loader and bush hog. He came back with a much better price. It was in my ball park. I asked him if he could throw in a trailer for a bit more. He gave me a good price for that, too. I told him we had a deal and went to sleep. It was 4 in the morning and we had been writing back and forth since 1:45am.

This morning I got up and found a couple of emails from him in my junk mail folder. One telling me how to send the $500 deposit and another wondering if he had lost me. He told me that he will collect the rest of the money when he brings the tractor and I have a chance to look at it to make sure that it is what I want. He will show me how to take off and put on the attachments and he will also teach me how to drive it. I'm sure that he and I will have a good laugh before I'm finished. I really feel like someone has been watching over me.

Isn't she a lovely shade of orange? 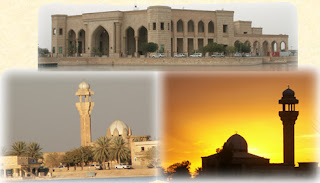 As my children's father used to say to them, "This is something you will remember the rest of your life." Twenty-five days and counting. I can't believe that my stay in Iraq is almost over. This has been a wonderful time in my life, even with all the trials and tribulations that I have had. I have been so fortunate to have wonderful people to work with and for, and a job that I truly love. For many years, I was too timid to try things that I didn't know how to do. Within the last ten years, I have learned that I can pretty much do anything I choose to do. I know that if I start out with a little knowledge, I will gain a lot by doing. That attitude has served me well, as I get ready to start a new life.

Leaving Iraq has proved to be a challenging experience but one I expected. The military is very concerned people, who re-deploy, might bring contraband back into the states, therefore, all packages mailed from here, through the US Postal Service are searched. I don't mean they kind of look through it, they unpack everything, wand it and repack. Being here for three years, I have accumulated stuff, lots of stuff. I have spent the last few weeks sorting, donating, trashing and packing my things. I have shipped most of it home already, ok, home isn't exactly where I shipped it, since there is no one there to get it out of the rain. I have shipped to my daughter's home in Bloomington. She has been kind enough to keep it for me until I return. I still haven't found out when I can leave. The contract is over on 30 June and I must have completed my travel to my home by that day. I work for one company and am subcontracted to another. Between the two, they make the decisions for my final travel. They seem to be having difficulty speaking to each other, so I am in limbo. Contracts seem to work like that. At the end the contractor is usually in limbo. Will the contract be renewed, will I have to find another job or like me, when can I leave?

During the time I have been here, my family and friends have been incredibly supportive. My father learned how to send email and sends me messages, which mean so much to me. My sister sends emails counting down days until a vacation or now, until I leave. They have sent care packages, letters and cards. My daughter and son have taken care of my mail. On a fairly regular basis, they send me mail call, via email with all the bills and statements that pertain to my finances. Most things are automatically paid online but some are unexpected or not available online. Having them there to take care of those things has been such a blessing. When I need something and can't get it online or shipped to me here, they and their spouses get what I needed or wanted and ship it to me, often times sending artwork and pictures of the grandkids. My daughter even signed all the paperwork when I bought the house. A great friend and his wife picked up my new truck and are storing it until it is time to ship it to Indiana. Without all their support, life would have been much harder. I truly have a wonder life, family and friends. I have been truly blessed.

Here are a few fun memories from the Iraq Assistance Group, the first couple of years that I was here. 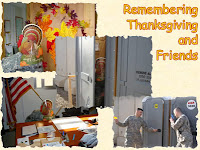 Yes, that is one of my co-workers with a mask on, hiding in the porta-potty and in the General's office. And, yes those are two other co-workers hunting him with squirt guns. Sometimes you need to lighten the tension from 12 hour days/7 days a week. They always kept us laughing. 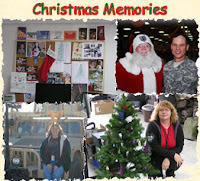